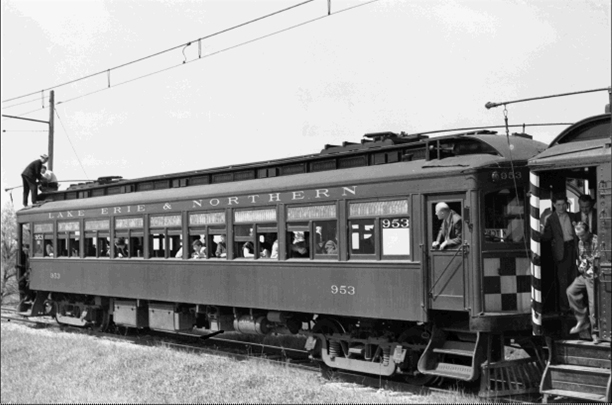 Rail fan trip on the LE&N and GRR on May 10, 1953. Car #953 of the LE&N and Car #862
of the GRR ran in tandem for the excursion. [Photo taken by Norm Kistner / compliments of his son, Erwin Kistner]
The Lake Erie and Northern Railway and the Grand River Railway were associated electric lines operated by the Canadian Pacific Railway under a 99 year lease. The combined line of the two legally separate electric subsidiaries of the CPR operated from Port Dover on Lake Erie to Kitchener over 69 miles of track in the Province of Ontario, Canada. Passenger electric service existed for almost 40 years and ceased on April 24, 1955 when the CPR applied for and received official sanction for the termination of passenger service.

The LE&N was unique in that it was one of the last interurban electric rail lines in North America. A brochure for the Farewell Trip of the GRR and the LE&N sponsored by the Syracuse Chapter of the National Railway Historical Society on Sunday, April 24, 1955 stated:   "Here is your chance to shake off those winter doldrums as spring returns to the beautiful southern Ontario Countryside. Ride over well-kept private right-of-way, cars such as you will never see in service again. For this is more than a farewell to the LE&N; it is good-bye to an era, a way of life, an institution." 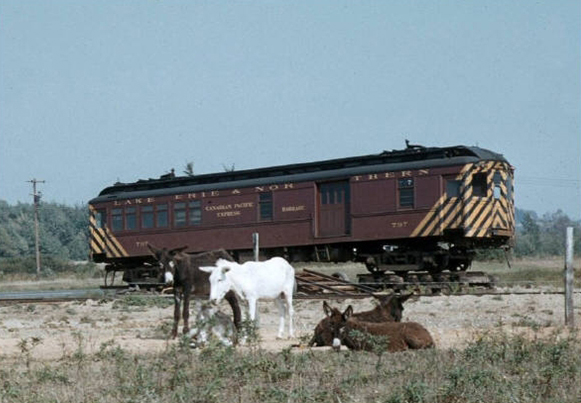 The "Wild Burros" imported from New Mexico appear little amused by the arrival of L&EN car #797
to Rail City Museum. The car moved on its own wheels to Lacona, NY and was trucked the remaining five miles to Rail City.
The LE&N car remained in this location for the October 23, 1955, dedication ceremony. Later that same year,
it was placed on the main rail line at Rail City and moved to a more central location within the museum.
[Photo by Stanley Groman, RCHM Collection]
When passenger services ended in 1955, LE&N car #797 was donated to the Syracuse Chapter (later to be renamed the Central New York Chapter) of the National Railway Historical Society. The car was built in 1915 by Preston Car and Coach Company in Preston, Ontario. It was propelled by four 85 horsepower and could be operated from either end. This acquisition was the Syracuse Chapter's first piece of rolling stock and the effort preserved the only remaining electrified car from the LE&N. The CPR's negotiations to sell the cars from this rail line failed and the entire fleet, except for #797, was scrapped.

On October 23, 1955, the Syracuse Chapter of the NRHS and the Canadian Pacific Railway Company hosted a dedication ceremony at Rail City Museum, the home of the newly acquired car. About 200 rail enthusiasts attended the ceremony to hear George H. Baillie, vice president, Eastern Region, Canadian Pacific Railway, commend the Syracuse Chapter and Rail City Museum for their efforts to "preserve for the future those phases of rail transportation such as the electric interurban and the steam locomotive, which are so rapidly replaced by buses and diesel engines." 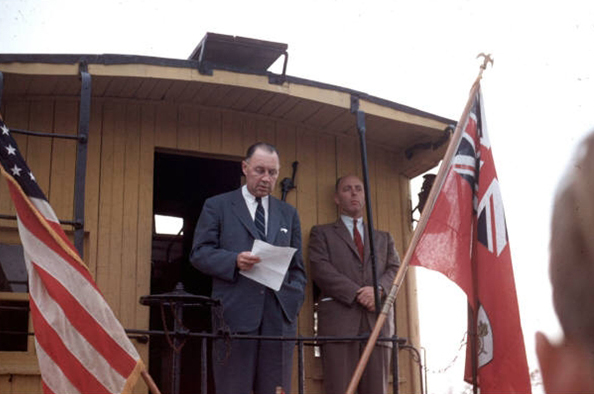